skip to main | skip to sidebar

Grant for the Takin'

I'm sorry Grant! I hope you don't think we were taking you for granted. I think you're smart and talented, that's why I asked you to be on Shaka Talk. But I had a break down, and kinda drifted from blogging. I owe you.

Grant Uchida is a singing comedian, who writes his own songs, but is kinda more popular for his song parodies. Not only are his versions funny, but I also like the way he tries to shed light on touchy subjects. Most people like to lecture others about topics they feel strongly about. Grant uses humour to approach the issues, like stalking, teen pregnancy, and being broke ass.

Grant makes other videos, like his new series"Blame it on the Writers", and he also provides the voice for the main character, in our August guest ~ muppephile ~ Dane Neves's newest movie, "Giant Monsters Attack Hawaii". So his fanbase is growing.

I don't know what else he has upp his sleeve, but his wit and drive will probbly make him more familiar to local people, and probbly beyond. He cool. 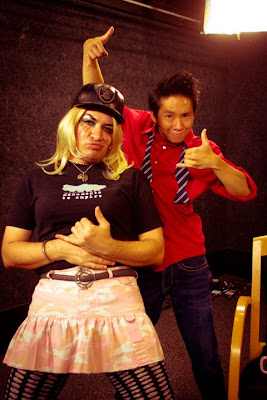 The organizers of "No Suck Fest 2011", my popolo huzzbin Kevin Tit, emerging artist Dana Paresa & too-smart-for-me Shawn Shits were our guests the other month. It's a DIY music fest, featuring local bands, as well as mainland guests Mean Jeans and The Dopamines. Everything kicks off with a FREE event at Mercury Bar on Thursday July 21; then officially starts at Anna O'Brien's (nee Bananna's) on Friday July 22; and finally closes with an ALL AGES night at the LOFT on Saturday July 23 (with 21+ After Party at Mercury.) Kevin started the fest a couple years ago, and now they're trying to make it an annual thing, like other similar festivals around the country. They've been throwing major fundraisers almost all year, and even had a successful Kickstarter campaign to raise money, for plane tickets to bring out the visiting bands. But the kids have also put a lot of their own money into promoting the shows as well. Advance tickets are available, with discounts if you buy for both nights. 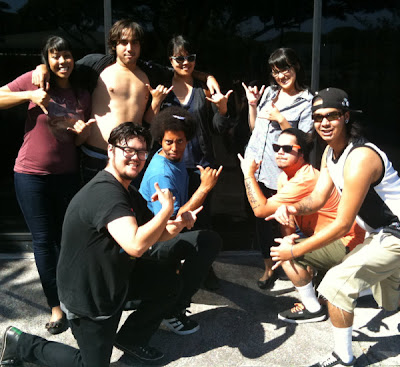 When we were planning the interview on our show, I told Dana to bring anyone she wanted, to give it a party-like atmosphere. Although most of the kids didn't wanna be on camera, we had a lotta fun, and I met a few new cuties who have kept my mind & hands busy. Hopefully to decompress, they'll get all fucked upp that weekend, and I'll be able to administer my Blow Suck Test on them to make sure they're ok. I'm not a doctor, but my name's D.R. on TV.
Posted by SHAKA ZINE at 1:10 AM No comments: 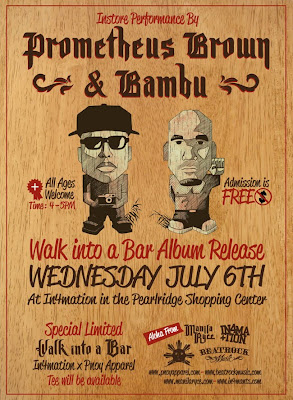 The boys are back in town. Prometheus Brown and Bambu de Pistola of Blue Scholars will be performing live at In4mation Pearlridge to celebrate the release of their new album "Walk Into a Bar". I've seen & heard their name a lot, so I assume they've played here plenny, but I rarely get to see them. In fact, I only seen them once, and that was at TooGruvz to promote the release of their Hawaii-inspired EP, endearingly entitled "OOF!". 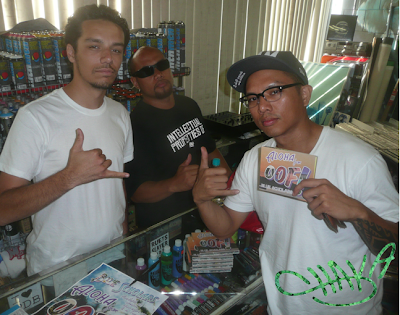 Not too many people were there that day, so if you missed it, Edna recorded their set for us. If I don't make it to their show this time, I hope someone records it and lets us know. #iluvmyhuzzbin

And here's a video of HI 808, with some cameos by cuties Aaron Honozooloo, that Mad Sexy Beast Lofa, Lightsleeper Kavet the Catalyst & major iKandy Christina. Now that we're entering the 2nd decade of the 21st Century, will it still be all about Asians on TV? Every reality show (that's all broadcast television has become) feature some shade of Asian (my favourite being Korean) regular. But for scripted shows, they're still relegated to guest spots, or extras, from what I've seen. That's ok, because too much of a good thing is junk. Like this couple minute spot featuring Poreotics on Disney's Shake It Up, is just enough foreplay to the sock session it inspired. 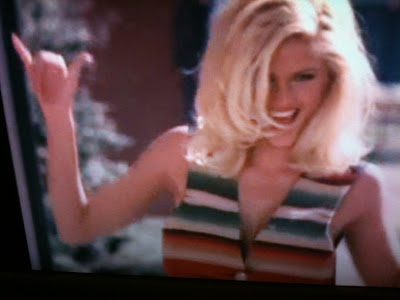 All good things must come to an end.

SHAKA ZINE
Aloha. Hope you like our show. It ain't always easy, but we have a lotta fun. Shaka Talk airs Thursday nights at 11:59pm Hawaii Time on Channel 52, or on our youtube page .